NEW DELHI: ‘Thoda mehenga kha lenge, but Pakistan se dar ke nahi rehenge (we’ll spend more on food and basic necessities, but we will not live in fear of Pakistan)” 18 year old Nikhil Gupta says. He turns down the upbeat music blaring on his mobile phone, and chats at length with us while serving customers at a pan stall in Delhi’s Sangam Vihar.

The Citizen team visited key areas across several Lok Sabha constituencies in Delhi so as to gauge the pre poll mood. First impression is an edge for PM Modi, with the Balakot strikes cementing the vote base further. “They killed 40 of our people; we killed 400 of theirs,” said Ravi Chauhan, sitting behind a paratha stall a few meters further into Sangam Vihar. “For every one of ours killed, we killed 10 of theirs.”

This time too, the fight seems to be between BJP and AAP. “I might vote for Kejriwal in the assembly elections, but for Lok Sabha, I’ll vote for Modi,” Bhavani Lal told us, while trying to hail an auto at Dwarka metro station. “Kejriwal has done work in schools, and yes, the area where I live is getting regular water supply which was not there four years ago. But Modi is the only PM face. Who is the opposition’s face?” 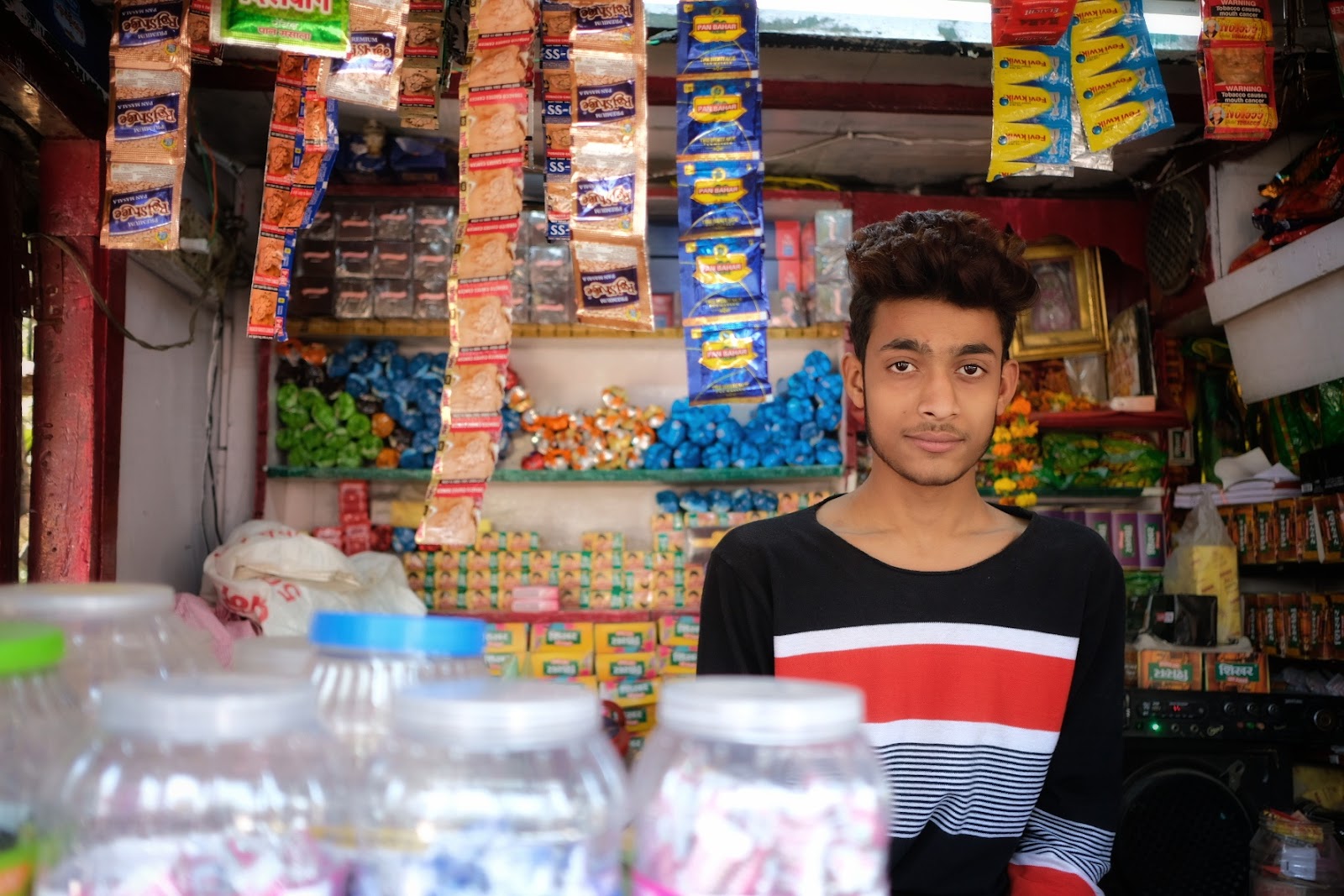 We encountered this narrative — of Narendra Modi at the centre, and Arvind Kejriwal in Delhi — repeatedly. While there’s a general acceptance that the AAP government has done good work — especially in schools, and in implementing regular water and electricity supply, there is some frustration with delays and unmet promises.

In Sangam Vihar, Asia’s largest informal colony, a massive, currently uncomplete effort by the Delhi government to bring piped water and a sewage system to the area’s 1.5 million residents has divided the vote base. Many, like Nikhil, complain that the work has run into repeated delays. “It was a 21 month contract,” Nikhil says. “It’s been four years.” “The sewers are uncovered; the other day, someone fell in. Are we expected to live like this?” 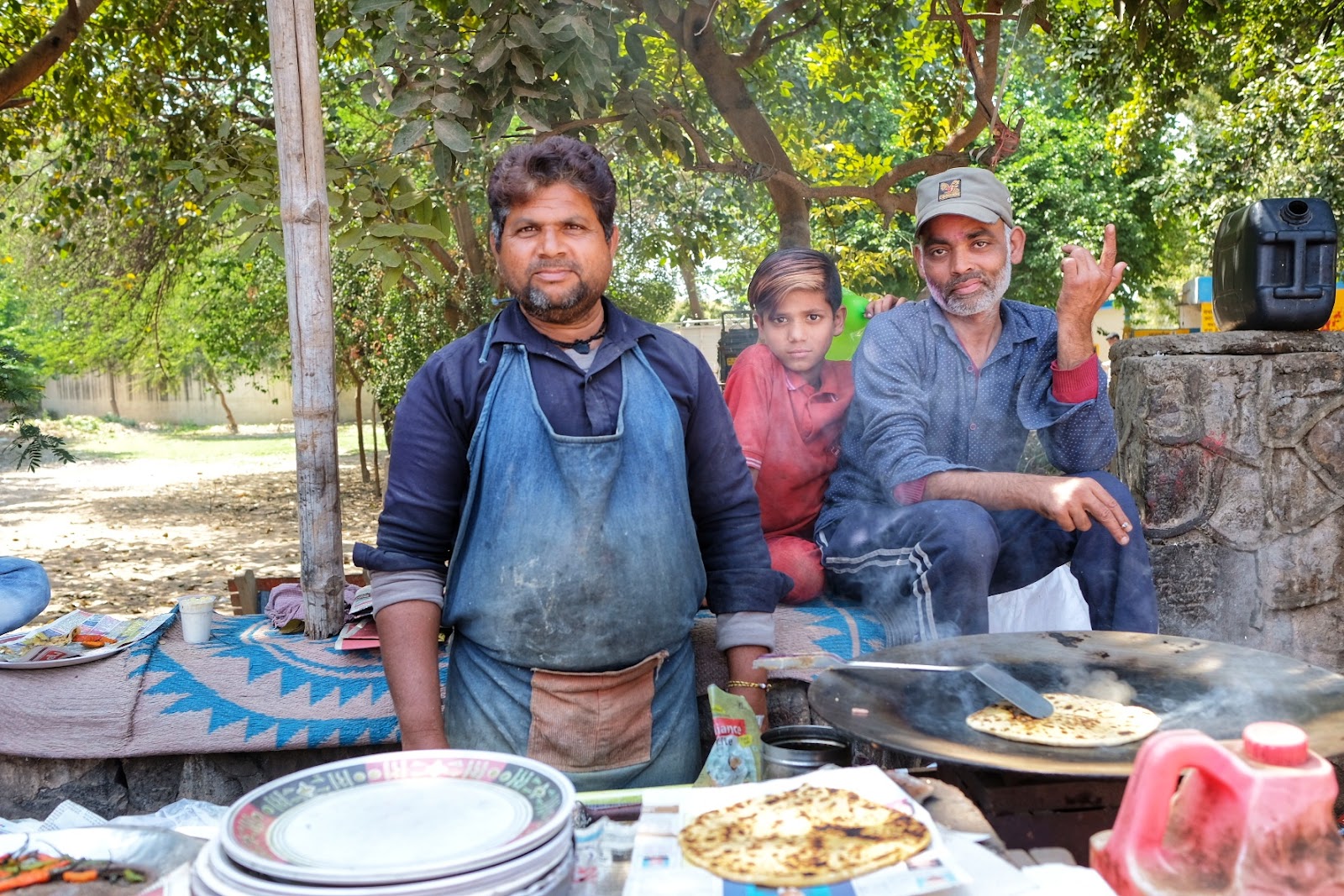 (Anup Aggarwal and Ravi Chauhan, with a young boy. At a paratha stall in Sangam Vihar)

The complaints are not an overreaction. The colony’s narrow lanes are almost unfunctional, completely dug up with work showing no signs of nearing completion. “Look, there’s chaos, yes … but at least there’s work happening,” says Ashfaq, a customer at a local food stall. “Earlier no one did anything, at least Kejriwal is doing something.”

A few meters down, we hear a similar line of thought. Shahid, while complaining of delays, adds that at least work has begun. “Since Kejriwal, there’s a daily supply of water and electricity in the area … otherwise water would come once in 15 days, and we would all have to manage.”

Mohammad Nayab, a fruit seller in the area, says that even though work has started, people are upset with the long delays. “The roads here are nonfunctional. Things are a mess.” He says he will vote for AAP in the Lok Sabha polls. “They’ve given us water, cheap electricity … what else does the aam aadmi (common man) want?” 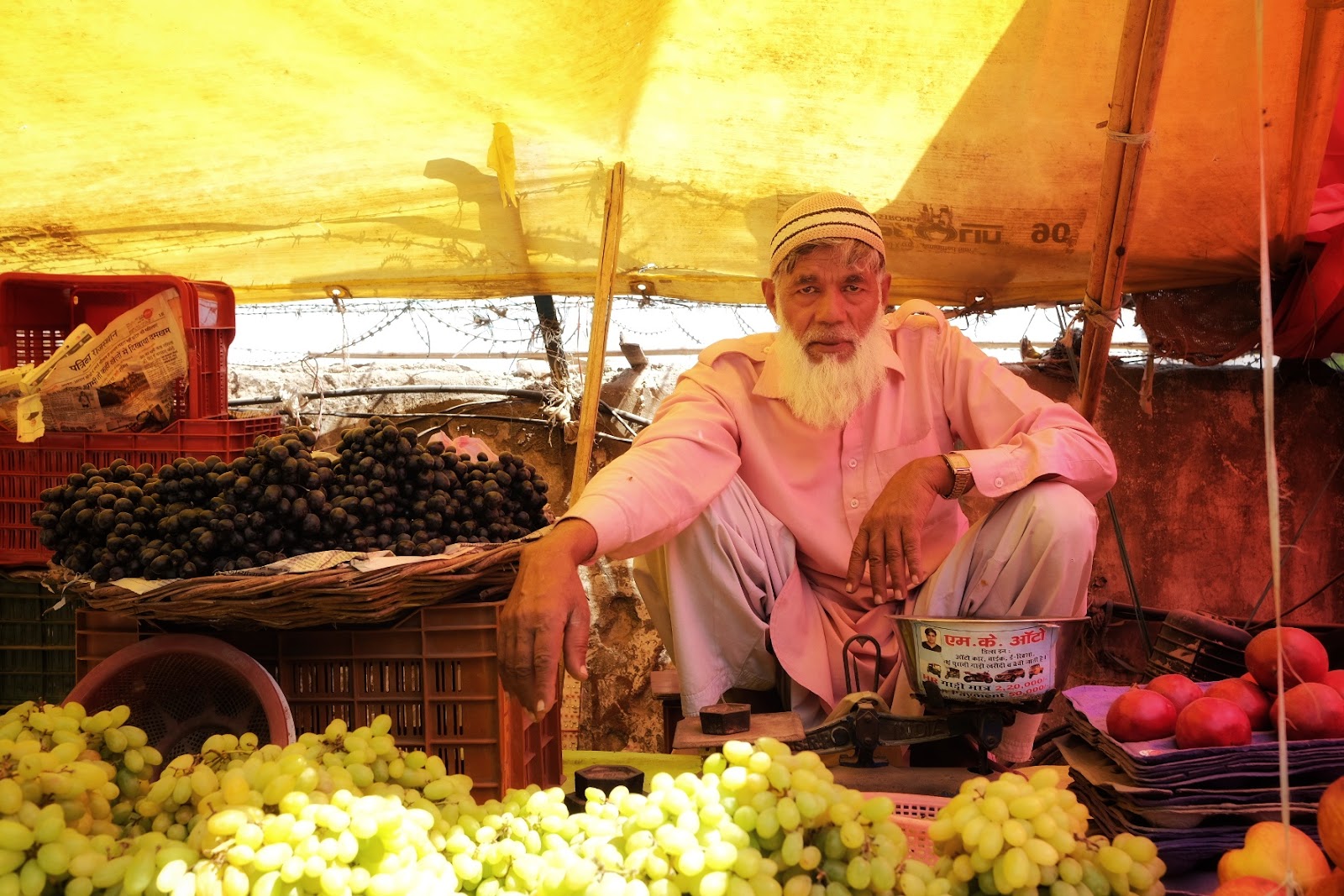 “If AAP and Congress enter into an alliance, then they have a chance. Otherwise, it’s a clear win for the BJP,” Mohammad Nayab concludes.

The owner of a mithai shop barely 50 meters away sees things differently. “Yes, work is happening, but not in the right manner. Everything is dug up. Kejriwal is breaking more than he’s making. There are no customers in the area. Business is suffering. How are we supposed to get by? People will vote for the BJP. At least when they work, they don’t add to the chaos … the break a little, make a little.” “Since Kejriwal began this work, kaam poora pit gaya (business has been badly hit),” says Mathiji, while offering us water.

At a juice stall deeper into Sangam Vihar a man dressed in a kurta pyjama and taqiyah says, “Yes work is delayed, but at least it’s happening. I’ve been here 20 years and no one has done anything… till now,” the elderly juice seller says.

“Other than BJP, there’s no one else,” interjects a customer with a tikka. “PM Modi is working. In my time, I haven’t seen a better Prime Minister.” “Water and electricity was always in the area… AAP can’t claim credit for that,” the customer continues. The juice seller then interjects, “We never had water; now we do. AAP has done the work.” 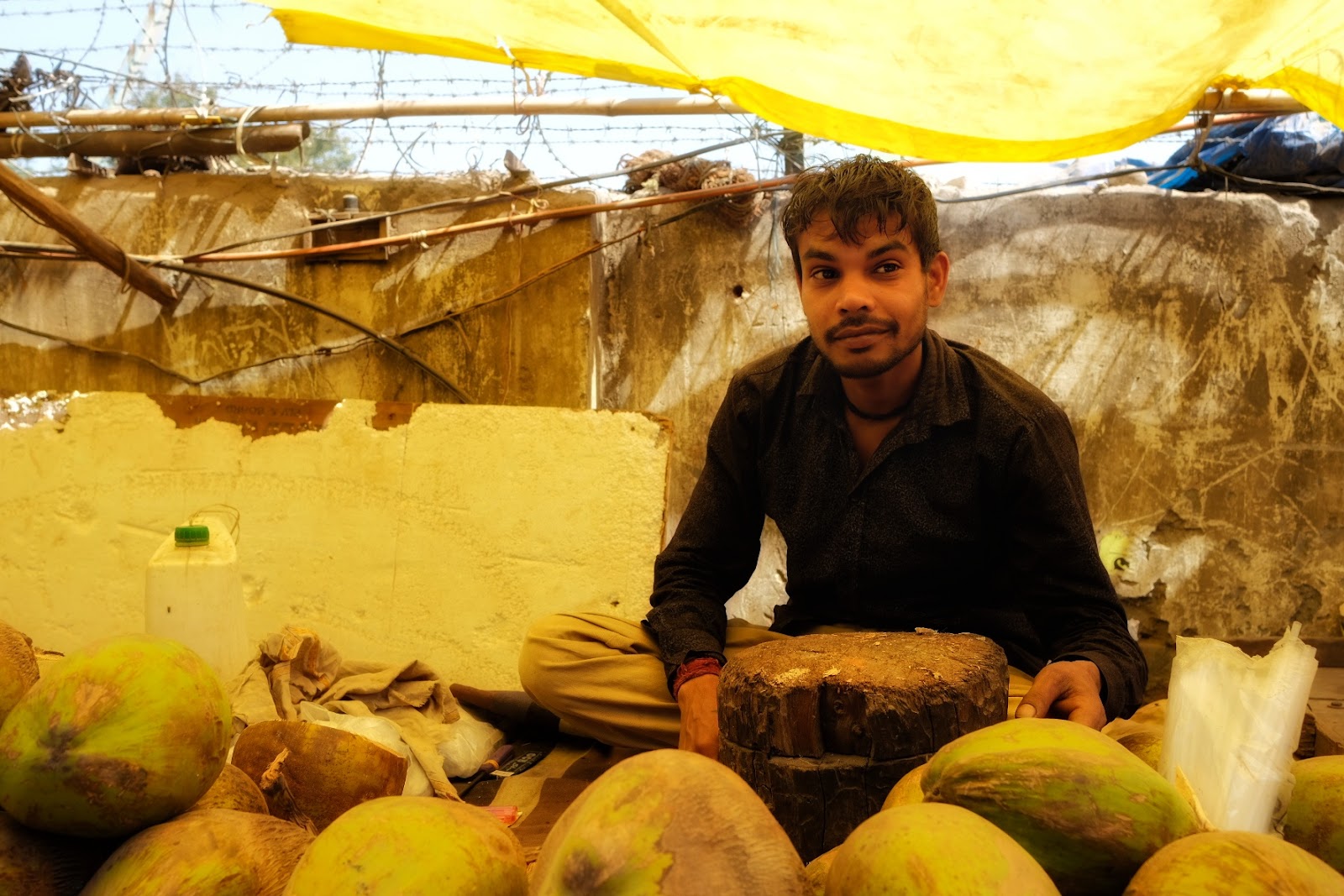 While leaving the area, we speak to a large group of autowallahs. Delhi’s autowallahs were one of AAP’s earliest and most loyal support bases, but we’re told of possible tensions in the auto union. Autos and taxis in the city have led strikes in protest of the Delhi government’s policies on cab aggregators.

“AAP made autowallahs their main target, and look – it got them so far,” says a young autowallah. “But what has Kejriwal done for us?” he asks. “I think if we give Modi five more years, he too will listen to autowallahs and meet our demands.”

The majority consensus amongst the now fairly large group of autowallahs that have gathered around us is, “Modi at the Centre, Kejriwal in Delhi.” “There’s no PM candidate other than Modi,” says Ram Kishore. 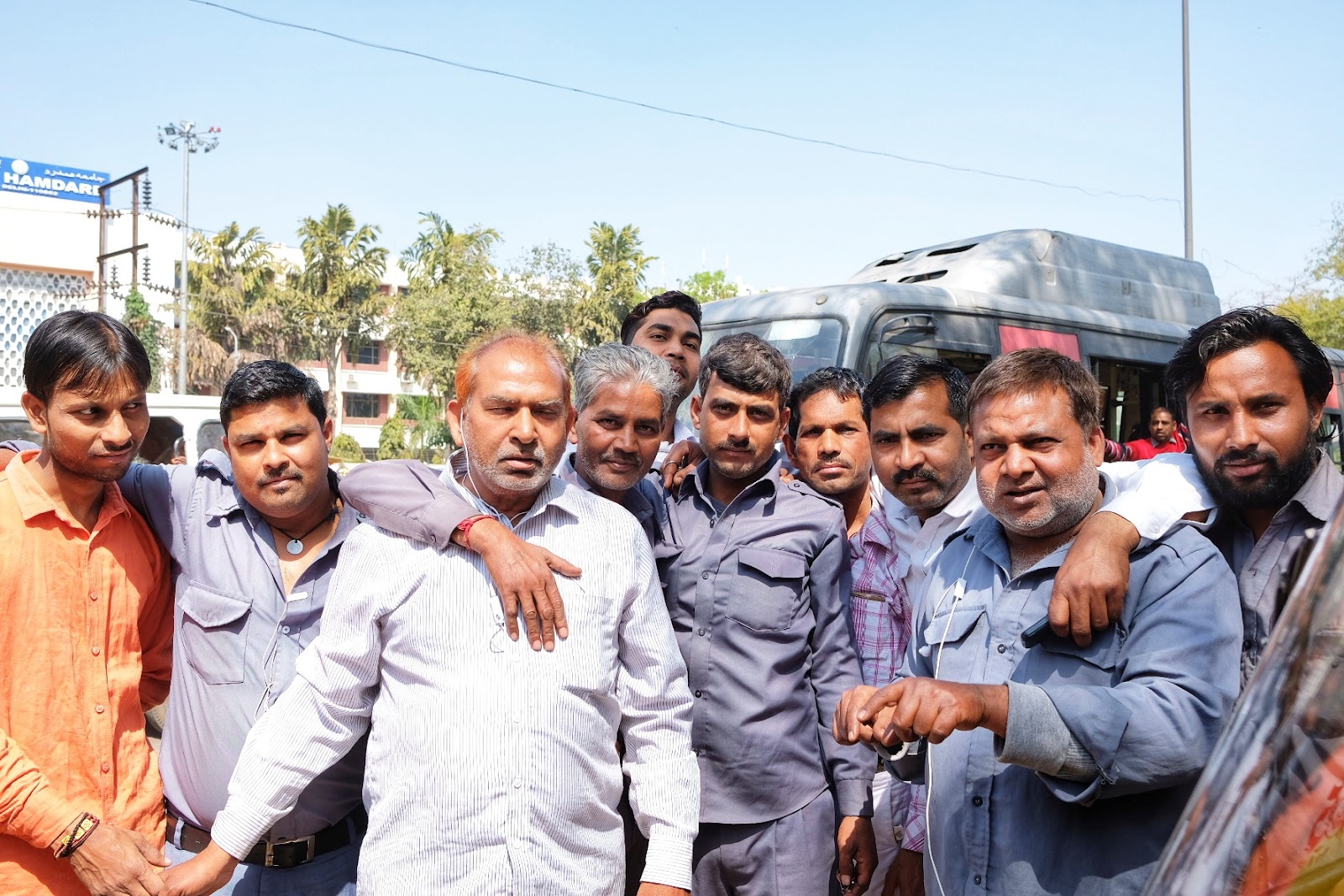 (A group of autowallahs. “Modi as PM, Kejriwal as CM” is the general consensus)

At this point, four autowallahs join the conversation, and start listing the AAP government’s achievements. “They’ve given us water, and electricity,” echo Alok Lal Gupta, Bipin Gupta, Jabbar Singh and Bitun Jai Misra. When asked who they will support, Alok Gupta, Bipin Gupta and Jabbar Singh all say Modi for Lok Sabha, and Kejriwal for the assembly. “I’ll vote for AAP,” says Bitun Misra … the lone voice in the crowd.

We ask about the AAP – Congress alliance. “AAP will lose my vote if they enter into an alliance with the Congress,” says Alok Lal Gupta. “No, we’ll vote for AAP irrespective … in the assembly elections,” counter the others.

“Is the vote for Modi or for the BJP?” we ask as we travel across Delhi. “For Modi,” says Prem Pal Gupta, a customer at a stall in Sangam Vihar. “For Modi,” echoes one of the younger autowallahs. “Modi isn’t at fault; the system below him is what needs fixing.”

Sumendar, a local Sangam Vihar resident, sums it up. “Everyone is arguing over which candidate to put up… the truth is, the BJP could put up a street dog and in most seats, it’ll still win, because the vote is for Modi.” 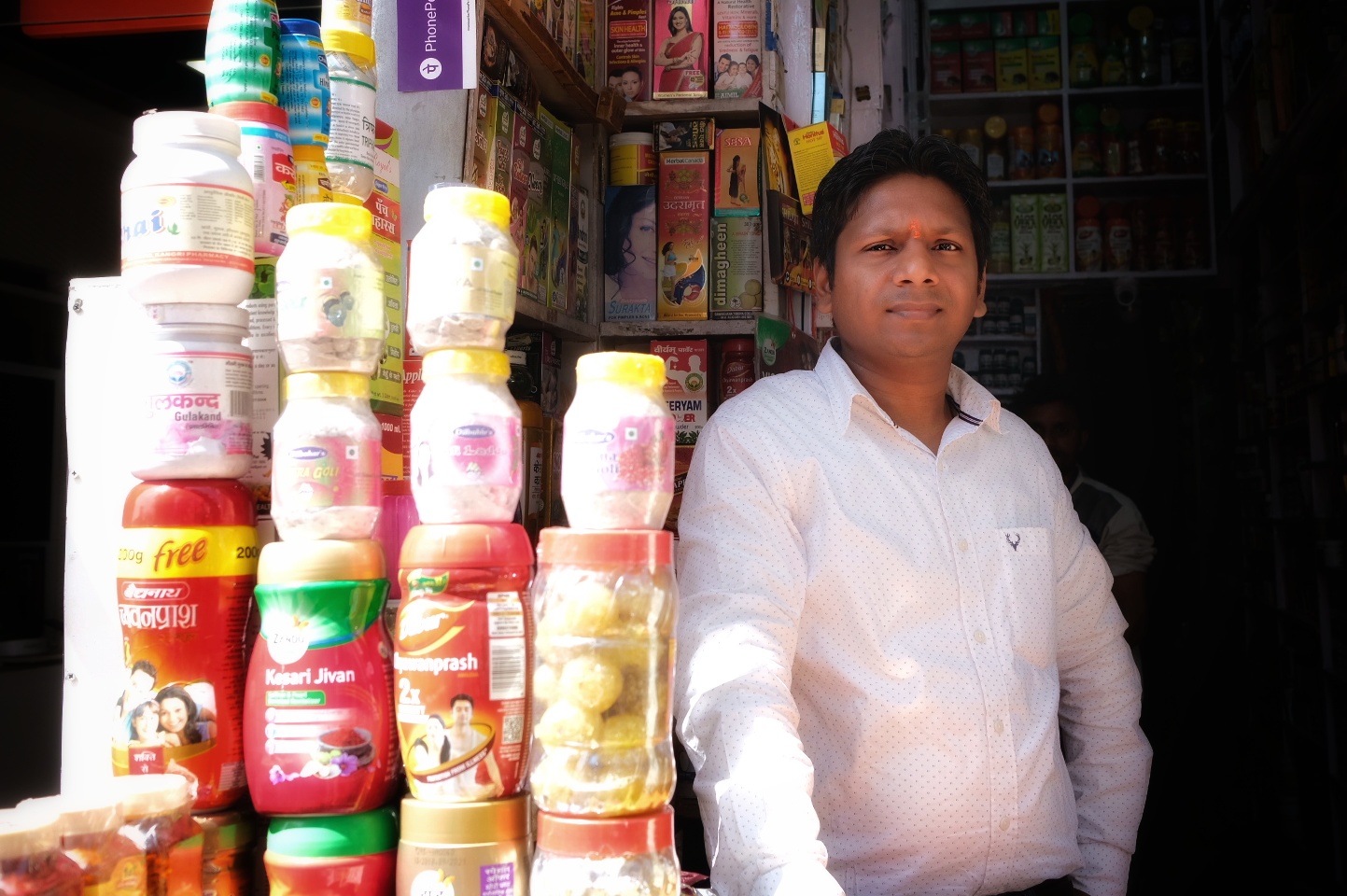 In Yusuf Sarai, several of the shopkeepers are vocal in their support for PM Modi. “ Modi is a strong leader,” says Niraj, whose shop dates to 1961. “Modi has worked in the last 5 years, he will come back,” echoes Divesh, another shop owner. Bhagat Ram says that the Balakot strikes will work in the BJP’s favour. “Earlier, BJP was probably winning 250 seats. Now I think they’ll win over 350.” 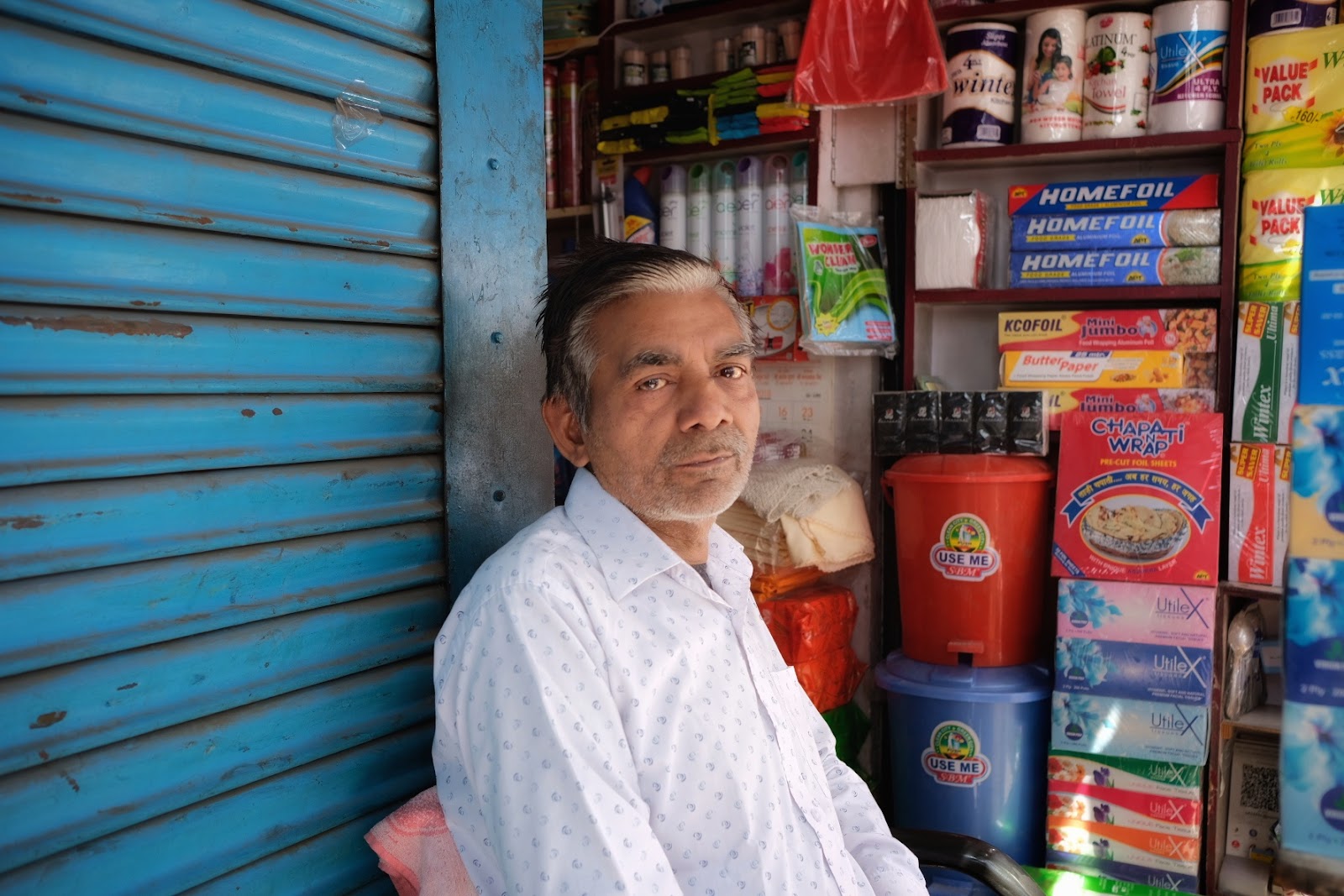 “Only Modi could take such a strong stand and take action against Pakistan,” says Avneet Jain, owner of a sari shop in the area. “Kejriwal is so-so, he complains a lot… All these opposition parties have no agenda of their own. Their only agenda is to defeat the BJP.”

“AAP and Congress need an alliance to defeat the BJP,” says Atul Garg, the owner of a small mobile and tech shop in Yusuf Sarai. “Balakot has had an impact in driving part of the disenchanted vote — affected by demonetisation and other measures — back to the BJP.” 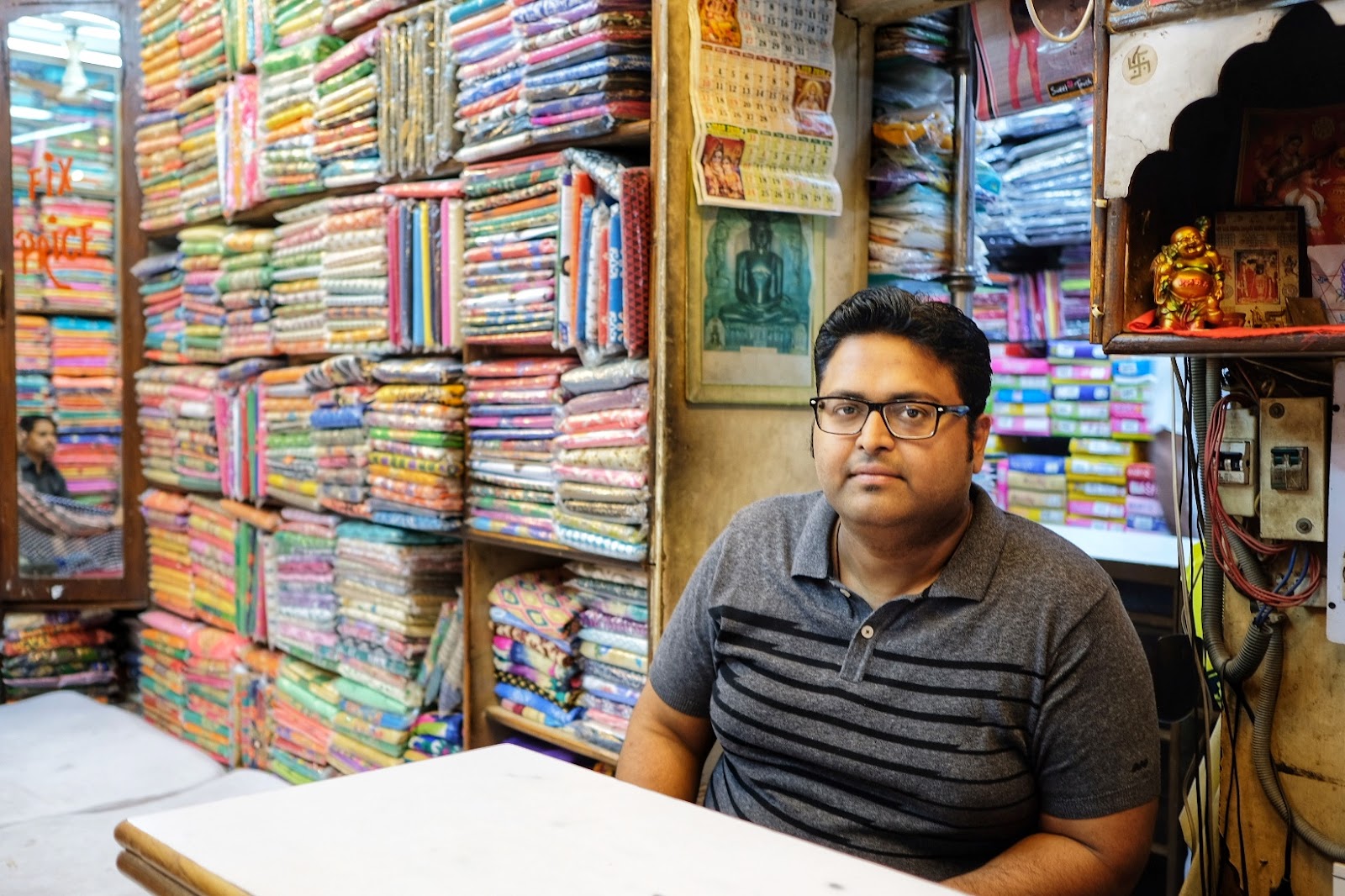 (Atul Garg. At a sari store in Yusuf Sarai)

The Balakot strikes seem to have worked amongst the BJP’s pre-existing support base, but not beyond it. “Balakot se hume kya fark padega? (What is the significance of the Balakot strikes?) We need food and work. Kejriwal has some done some work for poor but Modi and BJP have done nothing for us,” says Nathu Lal, an e-rickshaw driver in Mayur Vihar.

“It’s all show, little substance,” says Amit, an employee at a chemist in Yusuf Sarai. “The BJP government has made our life tougher.”

Where is the Congress vote? The Congress party, reportedly in talks with AAP for a pre poll alliance in Delhi, seems to have virtually no vote. We encountered one Congress voter … while following a beautiful Rottweiler from a fruit seller on the footpath into a pujari store in Yusuf Sarai. 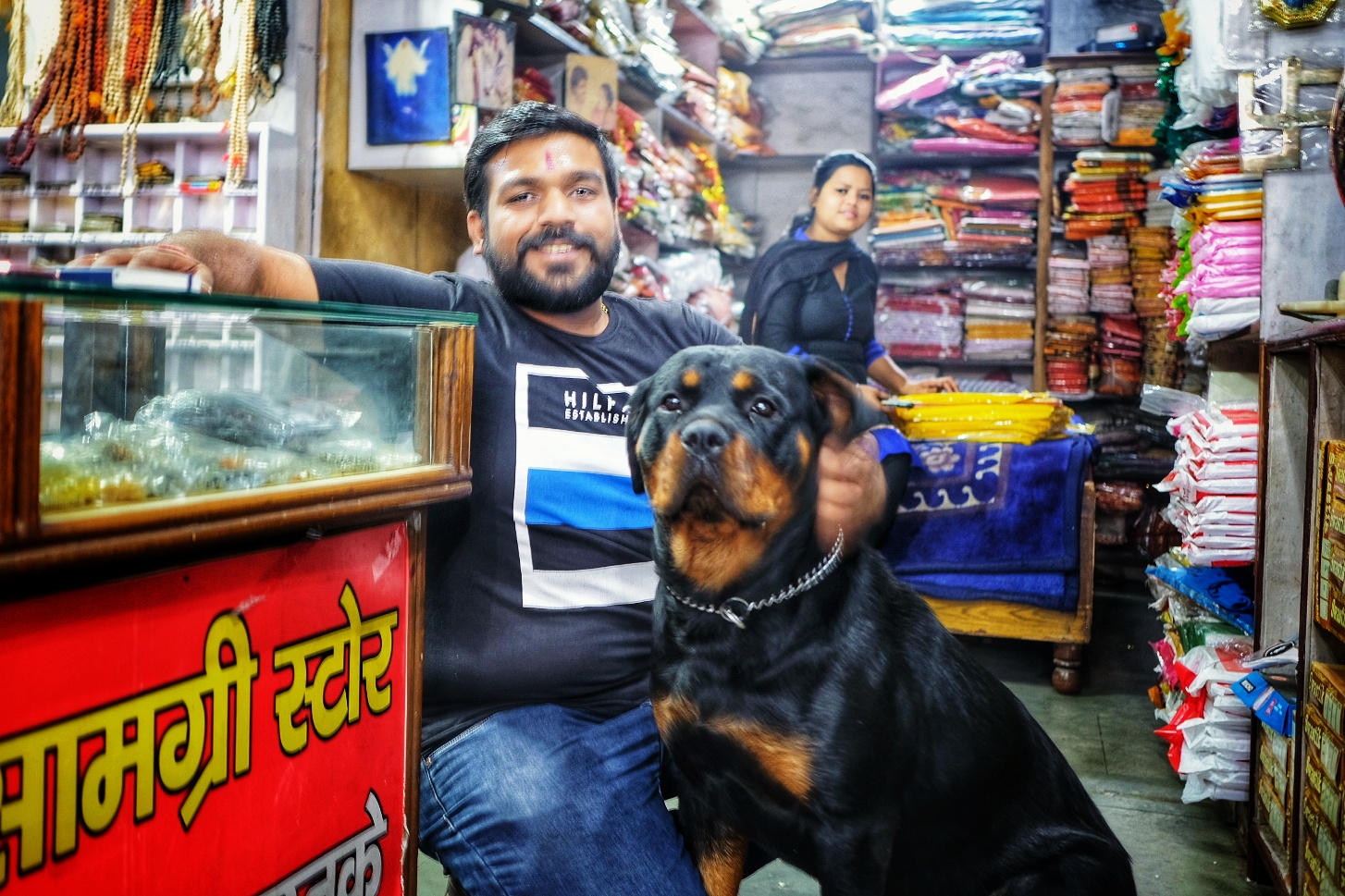 (Chutki, with her human Vivek Sharma)

“In 2014, I’d voted for the BJP… but not this time,” says the shop owner and Chutki the Rottweiler’s human, Vivek Sharma. “AAP is also fine … they’re doing good work. But our family has been a Congress family, so I’ll go back to voting for the Congress.” Vivek points to two photos of Indira Gandhi in the shop. “If there’s a AAP-Congress alliance, I’ll vote for whoever the alliance candidate is.”

Outside, we chat with two young men at a store with colourful clothing. “All governments are dhokebaaz (useless). Modi hasn’t fulfilled any of our promises,” says Akash. “I don’t like Modi, but I like his beard,” chimes in Deepak. The two have a good laugh, before telling us they’re not from Delhi. “We’re from Ferozabad.” “Our family are sappa voters,” they say, referring to the Samajwadi Party in Uttar Pradesh.

We walk away … reminded that Delhi plays a very small role in the Lok Sabha with just seven of 543 seats. 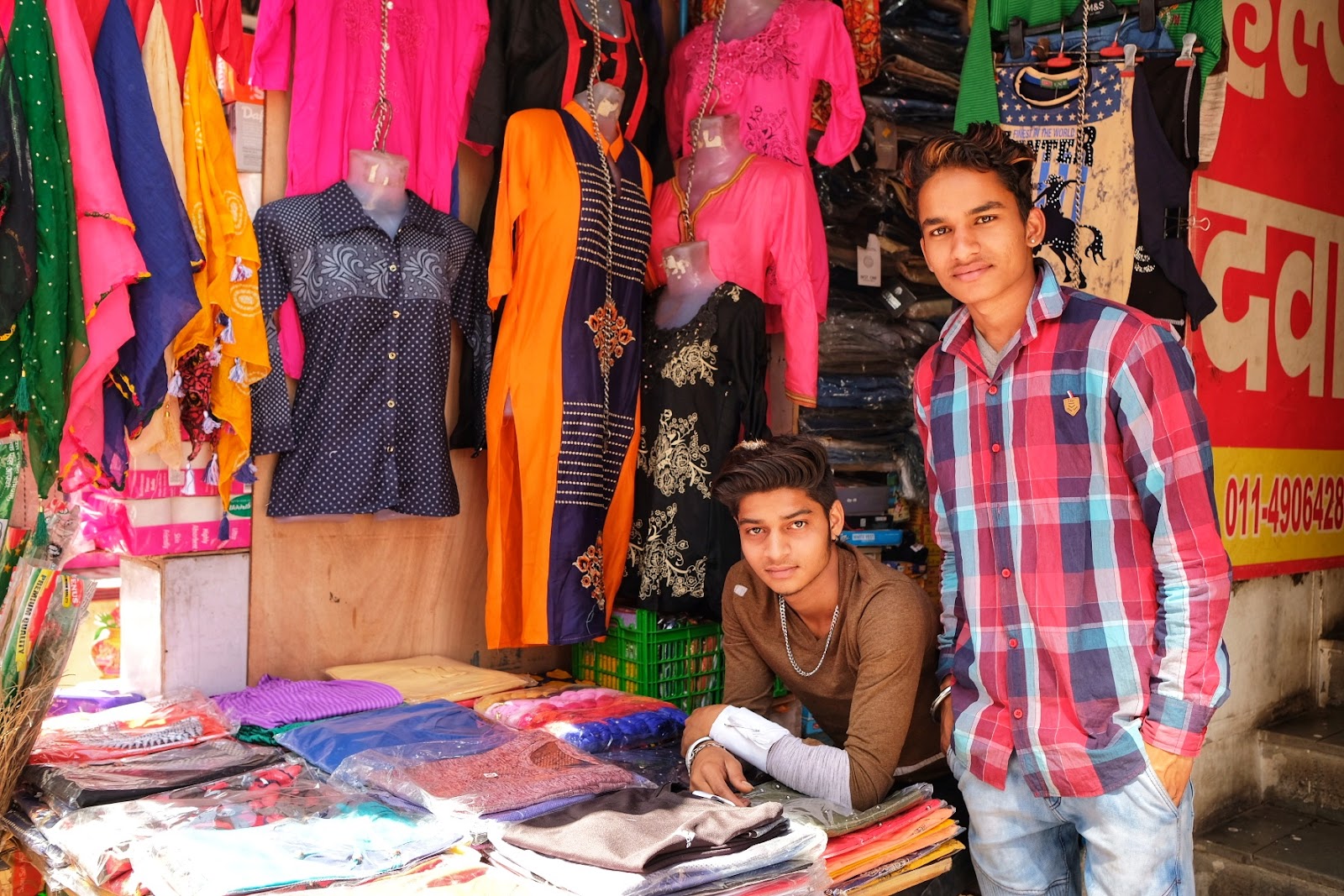 (Akash and Deepak. In Yusuf Sarai)

This article was first published in The Citizen